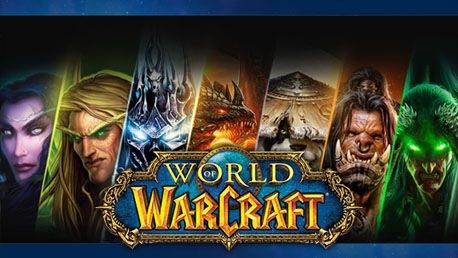 Begin your journey today and play up to level 60 through eight expansions of adventure! Explore a world of fantasy and endless possibility... A world where you’re the hero of your own epic story and new adventures await you around every corner. To begin or continue your journey, all you need is a ...

Begin your journey today and play up to level 60 through eight expansions of adventure!

Explore a world of fantasy and endless possibility... A world where you’re the hero of your own epic story and new adventures await you around every corner. To begin or continue your journey, all you need is a subscription.

From the shattered world of Outland to the frozen wastes of Northrend, you’ll encounter deadly dragons, descend into ancient dungeons, forge unbreakable bonds of friendship, and maybe even discover the perfect fishing hole.

Discover countless paths to greatness, and forge new legends along the way. Join us and take your place among the mighty heroes of Azeroth.

Build your own unique hero from one of thirteen player races and twelve different classes then rise to epic heights of power as you challenge deadly foes in the pursuit of adventure, glory, and incredible treasure.

World of Warcraft is constantly updated with new adventures to undertake, lands to explore, and monsters to vanquish. For a change of pace, join the party at a seasonal event like Brewfest or Hallow’s End!

Enlist your friends to join forces with you as you negotiate the vast, battle-scarred landscape of a world at war. As you progress, you’ll encounter new ways to test your mettle against the enemies of Azeroth, from five-player cooperative dungeons to epic-scale raids. Countless opportunities await to prove yourself and forge new friendships.

Engage in thousands of custom quests, with more being added all the time. Confront Illidan the Betrayer, shatter the Lich King’s undead armies and much, much more.

Ascend to new heights of power as you explore a vast and ever-changing world. Traverse the verdant reaches of the Jade Forest, venture into the depths of Blackrock Caverns, and fight alongside an army against the Legion on the Broken Shore. With World of Warcraft’s revamped leveling system, you decide which content to experience as the chapters of your hero’s story unfold.

How does it work? Will I receive World of Warcraft 30 Days Game Time as a physical copy?

What does World of Warcraft 30 Days Game Time contain? Will I receive the same content as on Blizzard?

You will receive World of Warcraft 30 Days Game Time, which is an expansion pack that requires the base game on Blizzard.

Once the Blizzard App is installed and you launch it for the first time, you will be prompted to create a Blizzard account, or log in to an existing Blizzard account. Please note that all product keys you redeem will be tied to an account and can NOT be used again, so remember to remember the login information for this account!

When you're signed in to Blizzard App, click on the "Blizzard" logo in the upper left corner. Select "Account Management" in the menu that appears, which opens a new browser window with your Blizzard account. Touch the green "Add a Game Key" button to the right and enter your product key in the text box. The product will now be added to your account and is ready to be downloaded and installed.