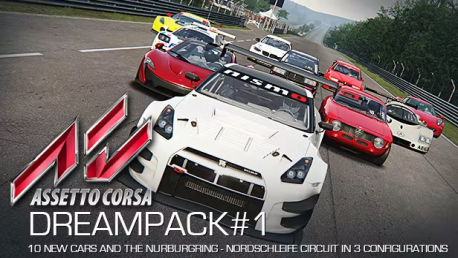 Welcome to DREAM PACK 1, the first add-on content pack ASSETTO CORSA. This package adds to Assetto Corsa the legendary circuit of Nürburgring-Nordschleife and ten new awesome cars. The circuit has been reproduced for the first time in a PC racing simulation using the Lasersca...

Welcome to DREAM PACK 1, the first add-on content pack ASSETTO CORSA.
This package adds to Assetto Corsa the legendary circuit of Nürburgring-Nordschleife and ten new awesome cars. The circuit has been reproduced for the first time in a PC racing simulation using the Laserscan Technology, that guarantees the maximum level of precision in reproducing each detail of the track. The selection of cars has been choosen by the gamers who voted their favourite models, and it consists in a perfect mix of vehicles of different classes, type and ages, ready to satisfy any taste of Assetto Corsa users!

Since its construction (1925 - 1927), the Nordschleife has enjoyed a reputation as a terrifying and merciless route through the Eifel forests. An English journalist who visited the Nordschleife during the opening race on 18 June 1927 even concluded “that it seemed as if a reeling, drunken giant had been sent out to determine the route”. The Formula 1 pilot Sir John Young Jackie Stewart – after all a three-time world champion in 1969, 1971 and 1973 – was so impressed by the circuit that he gave it the name which it will probably never lose: Green Hell (Grüne Hölle).
Racing and winning on the Nordschleife has always been very special for racing drivers, because the track is one of the most demanding in the world. Tricky corners, treacherous crests, steep inclines and gradients and constantly changing road surfaces demand great skill from the driver and put vehicles to a hard test.
The best-known event today is the ADAC Zurich 24-hour race, which is held on both the Nordschleife and the Grand Prix circuit and which for four days transforms the entire circuit into a huge spectacle. Up to 800 amateurs and professionals in up to 200 cars take part in this race.

How does it work? Will I receive Assetto Corsa - Dream Pack 1 as a physical copy?

What does Assetto Corsa - Dream Pack 1 contain? Will I receive the same content as on Steam?

You will receive the standard edition of Assetto Corsa - Dream Pack 1 as a digital download for Steam.