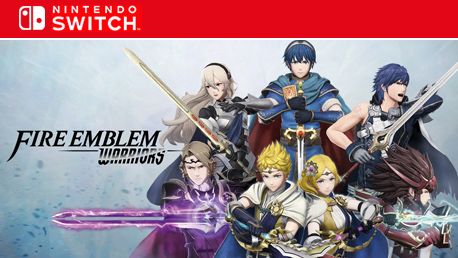 Heroes from across the Fire Emblem universe collide!

Clash with legions of soldiers and fierce monsters as Marth, Xander, Corrin, and other Fire Emblem heroes unleashing over-the-top-powerful Dynasty Warriors-style moves. Take direct control of known and original Fire Emblem characters, issue them strategic commands in the midst of battle, pair up heroes to unleash stunning attacks, and more. Unlock new playable heroes, each with their own unique moves, special attacks, weapon types, and voiced dialogue in this large-scale action game from the Hyrule Warriors team.

Play and experience a new kingdom with original characters colliding with heroes from across the Fire Emblem universe.
Battle as fan-favorite Fire Emblem heroes, like Chrom, Corrin, Ryoma, Marth, Xander and more, each with unique moves, special attacks, weapon types, and voiced dialogue.

Pair up two hero characters as a single unit that can unleash devastating combos and even switch between these heroes mid-attack.

With the classic weapons triangle, tactically choose and switch between Fire Emblem heroes to gain the advantage in combat against countless enemies.

How does it work? Will I receive Fire Emblem Warriors (Nintendo Switch) as a physical copy?